Virgin broadband crashed on Monday, so Amy decides we need to talk the old-fashioned way, on the phone, for our Behind the Screens interview.

Amy Shone is the headteacher of Let’s Act Drama School, based in London and her hometown of Doncaster. And despite the internet-based difficulties of yesterday, she is very enthusiastic about virtual teaching.

“It just annoys me, because I never thought of it at all. Not one part of my head ever thought of teaching LAMDA online. It's just such an obvious thing to do.”

So obvious that Let’s Act made the shift before the lockdown even started.

“I went digital on the Tuesday before the lockdown, which was actually quite useful, because it meant that I tested it before everybody else needed to go onto it.”

This extra time meant that Amy and her team of teachers could experiment and find out what worked best.

“I didn’t like Google Hangouts. Zoom works better because it was easier to get onto and to me, the line was clearer.

Cameras were positioned in quiet spaces so they wouldn’t be filling the airwaves with the sound of someone making a cup of tea in the background, and then placed in front of the light so that the learners’ facial expressions were visible on screen.

“We had to get on top of this very quickly and make sure that the classes we’re doing are engaging and they work.” 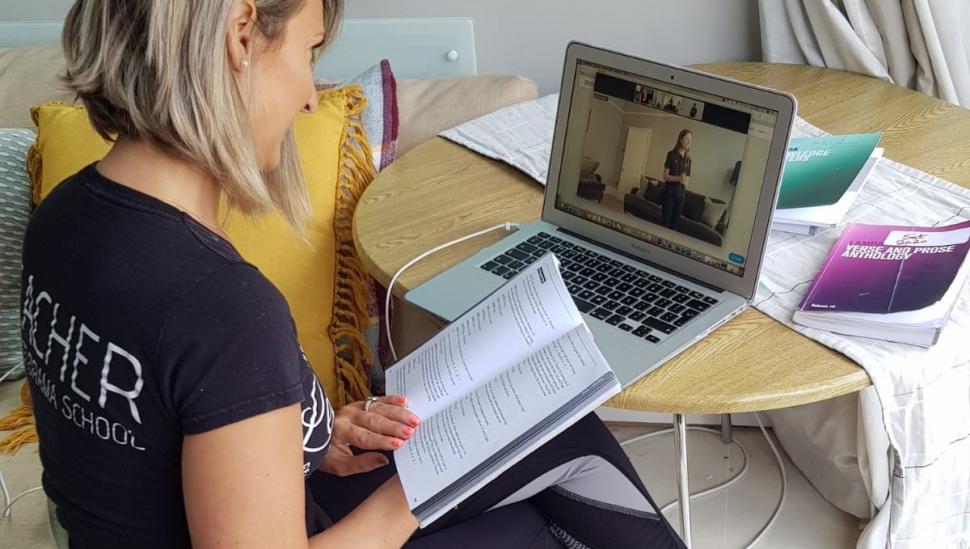 In order to make that happen, Amy and her teachers spent their weekends turning their homes into mini film studios. Amy tells me how the corridor outside her flat has been crammed full of backdrops and mics. “You’ve got to take space where you can find it at the moment.”
She’s even considering putting up a shed in the garden as a dedicated filming space.

How-to videos weren’t the only things to go into production. They also filmed warm-up exercises for their learners. These would be played at the beginning of the class, so that everyone could follow along, while allowing the teachers the freedom to go to their computers and greet the learners in the waiting room as they arrived for class.

Pre-filmed content also means that not everything has to be live. Amy already has a bank of theory videos on her YouTube channel, but now she’s adding to them. Her younger age-groups used these filmed lessons to ease themselves into the online structure. Building up screen time until they were able to take a full-length class in Zoom.

The students have been adapting fast to this new reality. But they soon noticed something very important was missing from their lessons. Stickers.

Stickers are hard to do online.

So each teacher hung up a piece of paper behind them. And on that, they’ve been drawing or painting stars.

And the kids are loving it. "I'll be honest, the first week, I didn't do it. And then the kids started asking who was star of the week. Because with everything I just sort of forgot. And it showed it meant something to them. So we would send them a digital certificate.”

She’s even introduced some new certificates to the mix: best learning at home, best building of a character. More rewards to spread the joy and keep the excitement levels high. 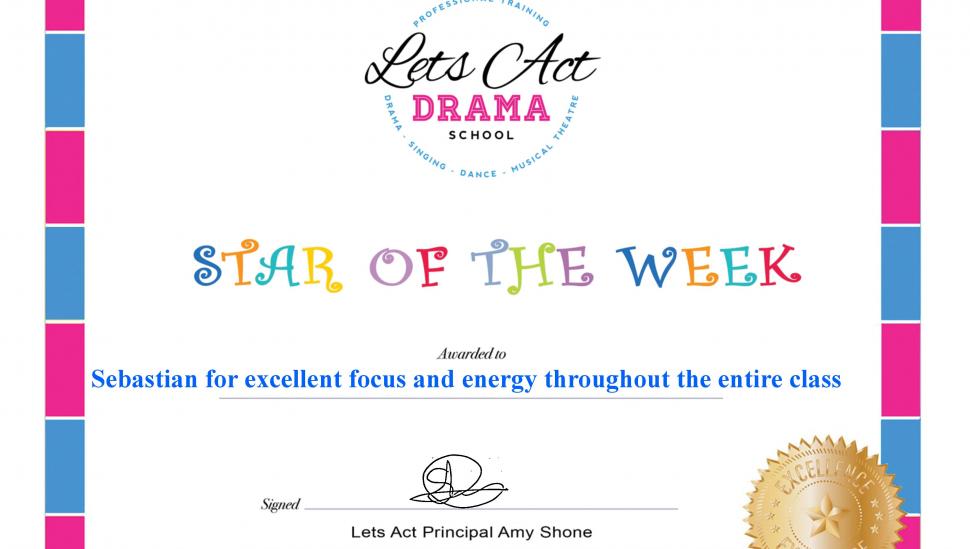 But the good times aren't limited to the classroom. Amy is keen to do her bit to keep moral up with the families too.

“We're doing a radio class now. The kids are going to come together to do a play and then record it as a radio play and then send it to parents. It's doing anything that we can to cheer up everyone.”

They are also making music videos, with each learner taking a line in a song with the recording switching automatically to the singer.

With schools out of action, I suggest that these productions must be filling in the void left by cancelled plays. These fun videos must surely be flying through the internet to land in the inboxes of distant family members.

“We did a show in two days and they all filmed little bits at home. It was so cute. And that had gone to people in Canada, Australia. But people loved it. Seeing your little kid do something like that as a grandparent or an auntie.”

With everything being filmed anyway, it makes sense to hit the record button so that parents can see what’s going on.It also means that her learners can watch themselves back.

Whereas before lockdown the classes revolved around a more theatre-based methodology, her learners are now getting a crash course in screen acting – from figuring out the physical bounds of their space and remembering not to look at the camera (“you can't because when you're looking, it looks like you’re looking at the fourth wall”), to learning a more restrained acting technique. 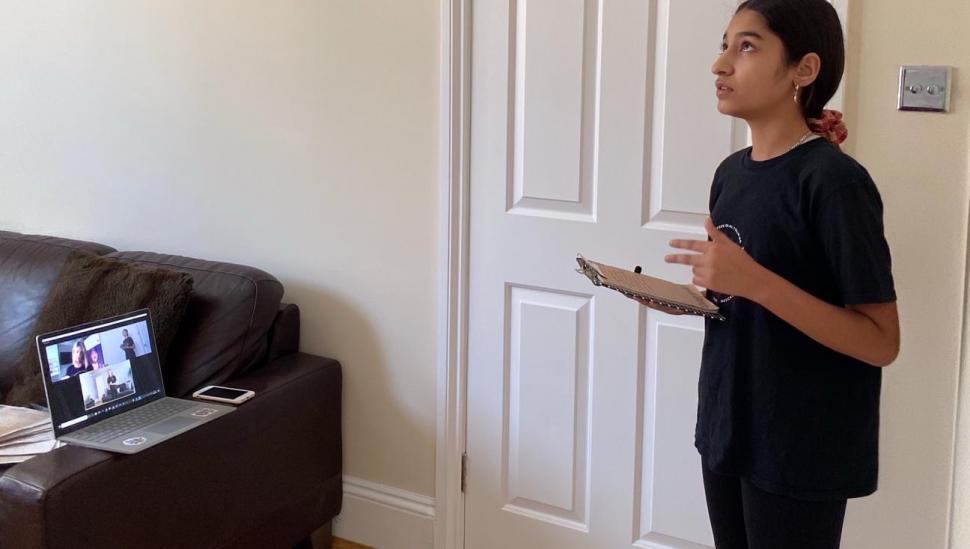 “They don't need to be as big. The camera is so close. Where before you may have shouted, you'll find that you get that some effect by raising your voice slightly.”

There’s also a technical reason for this modulation. “If you're too loud or too high pitched it effects the sound of Zoom, and it sometimes mutes it a little bit.”

All useful skills. Especially given our announcement that LAMDA Exams will start offering remote, online assessments from June.

I ask Amy if she plans on registering her learners for these.

“Oh yeah!” she says, without a moment’s hesitation.

It’s going to take some work, but Amy is confident that her learners are up to it. Students who had been working towards duologue exams are now practising monologues for solo exams. They also plan on using remote assessments as a way of fast pacing their education, using the extra time at home to learn new pieces and move up a grade.

But alongside all this hard work, Amy and her teachers are finding plenty of time for games. I ask her to give me a rundown of what’s working well. 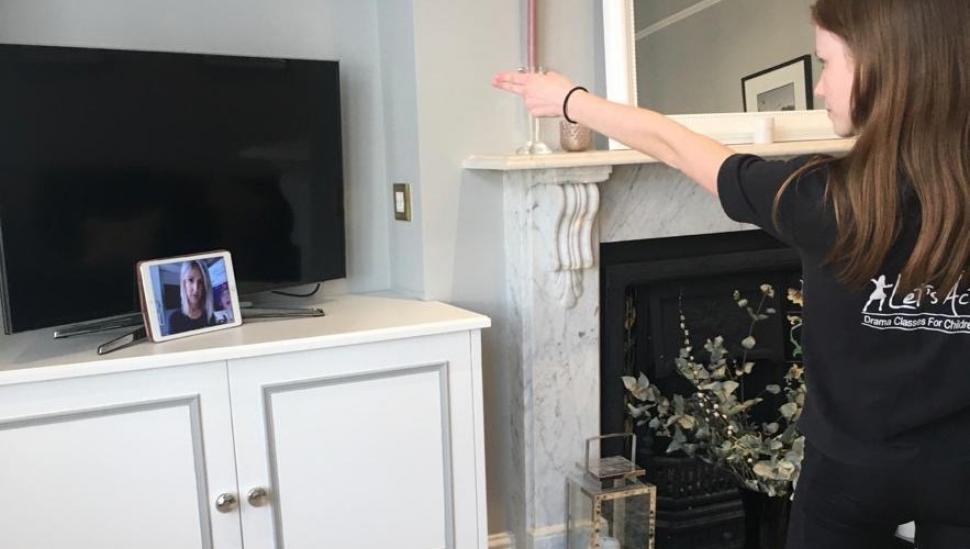 Scavenger hunts seem to be a particular hit with learners and parents alike, as the kids are sent off to find a red object in their bathrooms, or some other strange request, leaving laughing family members scattering in their wake.

She’s also seen a return of some of the older games.

“I think improvisation games have worked really well. You start a story and then someone puts their hand up and goes 'and then this happened...’ Telling a story in five words, that has been hilarious. They love that. Lots of games that I haven't played in ages. Like the supermarket game.”

That's the one where each member of the class says: “I went to the supermarket and I bought...” A cactus. An elephant. A jar of frog spawn. The more ridiculous the item, the better. Because the next person not only needs to top your item, but also has to remember what you bought. By the time you get round the group, you have quite the shopping list of non-essential purchases.

“When the internet crashed, one of my kids was like: ‘if we’re good, can we play the supermarket game?’

“It’s where you sing bun-ga-low, bun-bun-ga-low,” Amy tells me, immediately launching into song. “And you clap. ‘Hey Maxine, hey Maxine, let me see your bungalow, my hands are high, my feet are low, and this is how I bungalow.’”

By the end I’m almost crying with laughter.

“So there's plenty of games you can play,” says Amy once we’ve calmed down. “Loads and loads of games. And we have gone back. Sometimes in classes, you are so focused on the LAMDA exam, the show that they do, you forget about the games. It's brought them out of themselves again. And they've absolutely loved them. They see it as a treat.”

Amy tells me that lockdown has led to some of her former pupils returning. Now that being local is no longer an issue, learners who had moved away are rejoining her classes. It’s opened up a whole new world of possibilities, from the potential to offer extra rehearsals for their productions, to being able to check in on the pieces of the learners in the distant Doncaster branch before they take their exams. It sounds like even after the lockdown ends, the online classes are here to stay.

“I just wouldn't have thought it would have worked, but it does. It really does.” 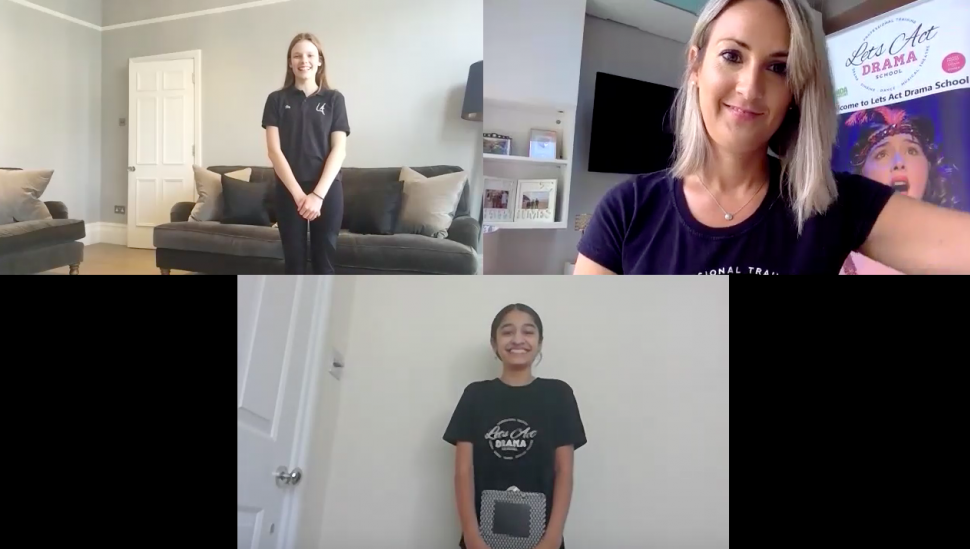