We find out how the audio department at LAMDA kept training going during lockdown.

As we resume some face-to-face teaching, we spoke with Screen & Audio tutor Tamsin Collison and students, Laura Woodhouse, Hannah Jarocka and Ahmed Elhaj, to find out how the audio department continued to thrive during lockdown.

Back in March, our graduating actors were in the middle of recording the latest series of audio drama pilots with our creative partner Audible. Then overnight the project was paused, and we all had to quickly adapt to working and learning virtually.

“The past few months were certainly a steep learning curve for the screen and audio department,” tutor Tamsin Collison tells us. “We normally have access to a fully equipped audio suite at our Talgarth Road building, and so I was worried about how to deliver classes to a scattered student body. But we found the transition online was pretty successful, from beginners’ classes right up to full-scale productions and I’ve been really impressed by the positive way students have embraced this new way of learning.”

This was in part helped by the ‘separate’ nature of audio work. “The director and engineer usually work in a different space to actors,” Tamsin explained. “So, for the students, the more familiar they become with working at a distance, the more comfortable they will feel when it comes to working in a physical studio space, with the director and engineer shut away elsewhere – both at LAMDA and in the professional world.”

That’s not to say that the switch to online learning has been without its challenges. “Students have had to become technically adept in new ways – learning how to use their phones as microphones, how to navigate the sound settings on their devices, how to build acoustic dens in their homes. They’ve adapted really well.”

It turns out there are a few simple tricks to creating your own recording studio at home.

Graduating actor Laura Woodhouse (pictured) explained, “Mine was set up in the cupboard of my bedroom at home in the Midlands. I managed to make it sound-proof by pinning a duvet above and behind me and covering the door with blankets to soften the sound. I was amazed at the creativity of our class to haphazardly improvise recording spaces that actually worked so well. I feel like I can set up my own recording studio anywhere I go now – all I need is a microphone, a duvet, some headphones, and the magical ability to make the builders stop drilling for one minute!” 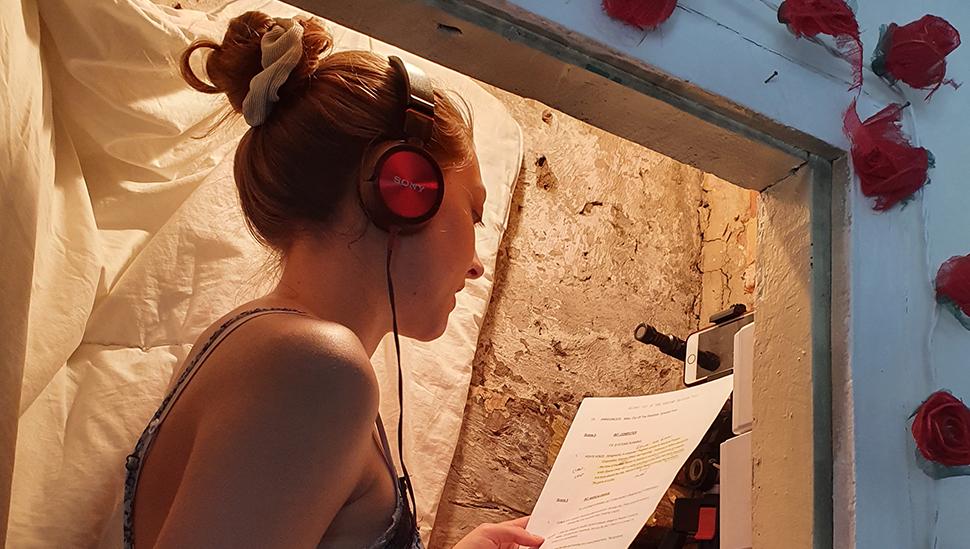 With make-shift studios set up, the graduating actors got to work on two pioneering remote-recording radio drama projects. Tamsin and Jack Thrush (Screen & Audio production technician) worked with students to record episodes of Alien: Out of the Shadows by Tim Lebbon, and LAMDA Exams alum Neil Gaiman’s Anansi Boys. Both series were dramatized by the audio director Dirk Maggs, who generously granted LAMDA permission to use his scripts.

The episodes were recorded using the software Cleanfeed, which works in a similar way to Zoom but with audio only. A host will invite cast members into a shared audio ‘studio’ space, which they connect into via a microphone (such as on a mobile phone) and a separate set of headphones. The director and engineer are also linked into the space so everyone can talk to each other.

Production and Technical Arts student Hannah Jarocka assisted editing one of the radio plays. “My only editing experience prior to this was video editing, so as well as trying to wrap my head around a new software I was also adjusting to a different way of editing” she told us.

“I've spent the last few years only doing theatre, so working on a project where I never saw the actor's faces was very strange! I was really impressed as to how smoothly the whole process went and how the end-product turned out. It definitely felt like quite an achievement to be able to create something like this from the comfort of our own homes.” 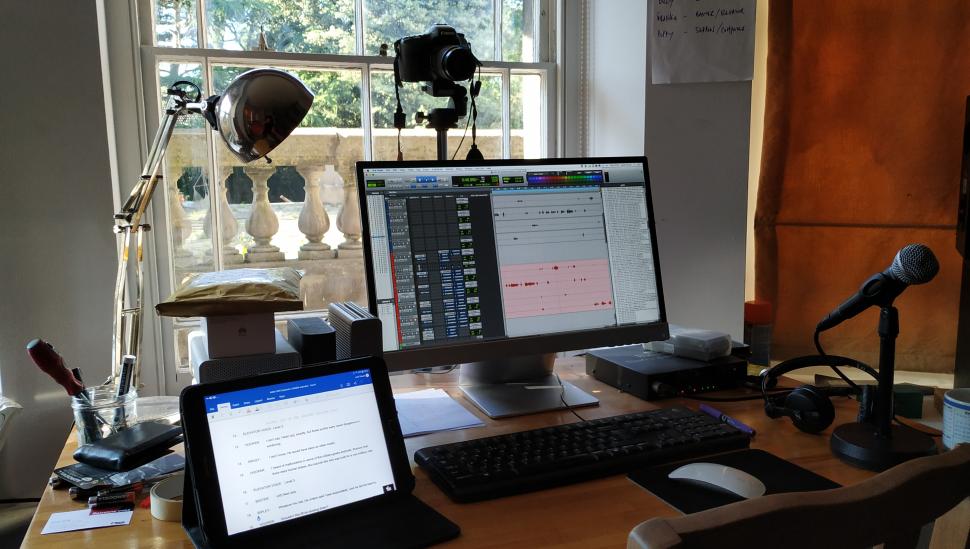 The next challenge was to create the sound worlds for both productions. “Anansi Boys includes a rather brutal murder, which presented a challenge with the murderer and victim in different locations,” Tamsin explained. “Luckily the engineer could play the sound sequence he created through to the actors in the Cleanfeed studio so they could interact with the effects in real time.”

There were some inventive solutions to create sound effects too. “Alien: Out of the Shadows takes place in space and we had the actors creating sound effects themselves, such as zipping up a purse, or running a pen along the spiral binding of a notebook to make the sounds of doing up spacesuits. Remote-recording has proved to be a far more creative and collaborative way of working that any of us had expected when we started out.”

The technical team also had to balance and mix all the separate feeds coming in from the actors to make it sound like they were in the same room. “I didn’t even realise until Day 3 of recording Anansi Boys that the two actors playing brothers at the heart of the story were actually recording in different countries – Nathaniel in the UK and Ahmed in Germany.”

Graduating actor Ahmed Elhaj added, “Working in a different space was so weird just because it meant you had to use your imagination so much more, plus other things like internet, cars driving by and people outside talking meant you had to really focus on trying to be in the scene. It was tough but in an exciting way.”

Reflecting on learning in lockdown Laura said, “It was pretty incredible and mad doing the audio work remotely. It really gave us a purpose, and a sense of community and creativity during lockdown where I know we all felt so isolated. The fact that we were all in our little cupboards at home, sweat pouring out of us on the hottest day of the year so far, laughing at how mad everything was but still doing the work, still being together even though we were so far apart, it gave me a lot of hope.”

Ahmed adds, “I’ve learnt how to just make the most with what you got. Especially the times we are in now, it’s hard to think that in the future everything will be aligned so it’s all perfect. There will always be problems but if we take it in our stride and deal with them, it can make life a lot easier.”

Although we’re now back in the studio and recording audio dramas, a lot of what has been learned over the past few months will be continued through the next year.

Tamsin concludes, “We have found ourselves on the cutting edge of the industry as it adapts through lockdown. I recently directed LAMDA alumni Ell Potter recording a new audiobook for Audible – Ell was based in Buckinghamshire, while I directed her via Skype from Surrey. We’re also now seeing big companies doing professional multi-cast audio dramas with actors and crew all linking up remotely, and I suspect this will become part of the norm going forwards.

The industry really is changing under our feet and LAMDA is right there in the vanguard. Audio is the first sector in the entertainment industry to be rising from its knees since Covid struck in March and I am very proud indeed that we are adapting and equipping our students with the best chance of participating when they graduate.”

Read more about our partnership with Audible.