Jack Wells is Head of IGCSE at Nanjing Hankai Academy in China. He tells us about the challenges he faces and his hopes for the future of LAMDA Exams.

My name is Jack Wells and I am about to embark on my seventh year working and teaching in China. Six years ago, I made it a personal mission to try and help develop drama education in China. The opinion at the time and one that is still believed by many today was that Chinese students are not creative and that they wouldn’t be suited to a subject like drama. I believe I am now starting to prove that that isn’t true and LAMDA has been helping me prove it.

In order to understand how education works in China you must understand the types of schools in China and Chinese laws. There are three types of schools in China: government schools which follow the national curriculum approved by the Chinese government, international schools which are mostly run by non-Chinese – these schools are for foreign students and are not held to Chinese education laws and Chinese students are not allowed to study at these schools, and schools known locally as Mingban schools – these are privately owned and cater to Chinese students.

Chinese law is that all students must complete nine years of their compulsory education. Drama is not a subject in their educational system. International schools typically follow British or North American curriculum, and drama forms a part of this. The types of schools that I have always worked at in China are Mingban schools. These schools are subject to Chinese law and must complete the nine years of compulsory education, but typically will have some leeway in their curriculum and allow for additional subjects to be added. 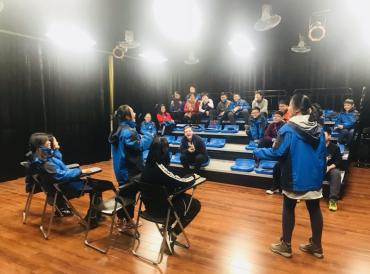 Because of these laws most Chinese students will never experience drama and those that do won’t experience it until they are in High School, by which point they have been subjected to a way of learning that has stifled their creativity. An education system that is obsessed with test-taking, spends large amounts of their time practising the taking of these tests, values memorising and is mostly taught through repetition.

Despite this, there has been a recent surge of interest in drama and the reason for this interest is Hong Kong. Over the past decade mainland China and Hong Kong have been slowly integrating into each other and as a result they have both been influencing each other’s societies. This is nowhere more evident than in Shenzhen, the city that borders Hong Kong. Drama is now being taught in dozens of Chinese schools throughout the city and is expanding in popularity.

Three years ago, I was approached by a Shenzhen-based company called Hankai. They wanted to build a brand-new school in Nanjing, with drama being a central part to the school’s culture and curriculum. Having lived in China for several years at this point, I knew the large number of the obstacles that I would face. One of those obstacles was how to show the value of drama and how to convince students to take it seriously. I knew that parents would want the familiarities that they are used to in their staple subjects, such as textbooks and tests. So, I took the unorthodox approach of writing textbooks for the drama classroom and introduced LAMDA Exams.

However, I didn’t think it was right to have LAMDA Exams purely for the sake of having a test, so I have slowly tried to integrate the LAMDA testing system into other drama qualifications. The end game with my students is for them to take their A-Levels and therefore an A-Level and IGCSE in drama would be a target. What is present in all these qualifications is devising and that’s why I made the decision to use the LAMDA devising exams as preparation for the students IGCSE and eventually A-Level drama exams.

In the school’s second year we took our first LAMDA Exams, with 200 students taking the exam and over 80% obtaining a pass with distinction. Although I was pleased with the results and happy with the way it has encouraged the students, I was worried that the grades were too high and perhaps the test we took too easy.

Popularity for the exams and the subject has been doubling each year and we expect a similar increase in interest next year with a possible 700 to 800 students in Nanjing taking the LAMDA Exams. Additionally, our school’s popularity has been growing so much we will be opening a new school in a neighbouring city and expect a further 300 students to take LAMDA Exams. 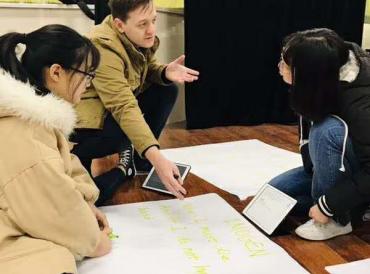 LAMDA and drama is growing in popularity in China, with both parents and students alike starting to respect the subject and understand the benefits it provides. One of the main reasons for the rise in popularity is the use of English. All students in China learn English, but very few learn it well. This is mostly due to a lack of opportunities to use the English that they have learnt, and drama is now providing that opportunity. Students who were shy to speak to foreigners are now bold and confident and the opinion that Chinese students are not being creative are slowly going away.

The future of drama in China is unknown but it is very promising and very exciting.